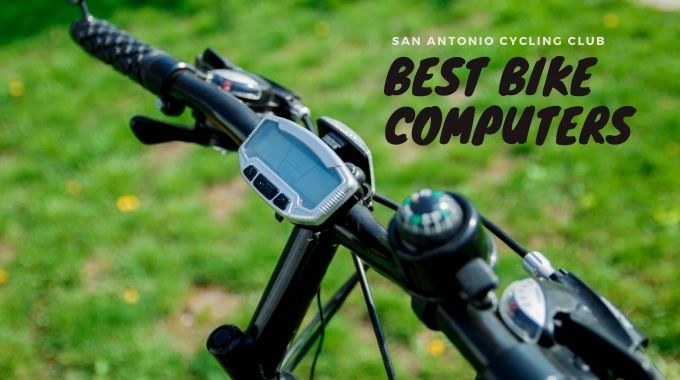 There’s no doubt about it, your cycling pleasure will be greatly enhanced by the purchase of even a basic, simple bike computer. Knowing how fast (or slow in my case!) you are going, how far you have been, how long you have been cycling for, and knowing your average speed is all gratifying stuff! There’s also something nice about having a point of reference and a connection between man/woman and machine – and it’s nice to look at. Also, let’s face it, we all love a bit of tech, and being able to spout a few statistics, quantify our efforts, push buttons and menus, and even download little charts of our progress is great fun.

What to look for in a bike computer

Firstly, you need to decide what you want your bike computer to do. Most bike computers tend to be biassed towards one particular type of rider. So, for example, you will find that the Garmin 520 has endless connectivity and recording functions ideally suited to the performance rider who takes training very seriously, but it is less accomplished on the navigation front. This does seem to be a slightly worrying scenario as personally, even after relatively gentle “training” I like to know where the nearest pub or cake shop is! 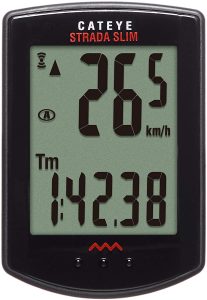 Conversely, some of the high-end computers have navigation as good as you would get in a car sat-nav but tend to have fewer “training” features.

You can get good all-rounders, but there tend to be compromises made so choosing the best bike computer becomes a case of “horses for courses” as it were, or more in my case, which stick will motivate the old donkey most effectively!

You can also get computers that will wirelessly connect to a heart rate monitor, a cadence sensor or a power meter if you want to track your performance in more detail. For each of these to work, you might need to buy the sensors ie the heart rate monitor strap, cadence sensor, and power meter, as an additional add on. Most computers and sensors are compatible between brands and use a common communication system called ANT and a few are only compatible within the same brand.

A number of computers now also connect to smartphones via Bluetooth so that you can receive notifications whilst you are riding. (AARRGGG…..NOOOO! – I go riding to AVOID bloody notifications!) You can also see who is phoning you up! Some of the more sophisticated bike computers will connect to Strava and other similar tracking/planning software/apps either wirelessly or sometimes via USB.

It’s great to know where you are going (and sometimes great to get lost and explore as well!) so some kind of navigation can be helpful. Basic computers won’t have any navigation facility at all. Moving up a level and the navigation will use GPS and be a simple “breadcrumb” trail as on the Garmin Edge 25 for example. Midrange navigation systems will have a more sophisticated built-in map that shows more detail. Top-of-the-range navigation systems allow you to route plan on the go and will have details of local points of interest etc very much like a car sat-nav. 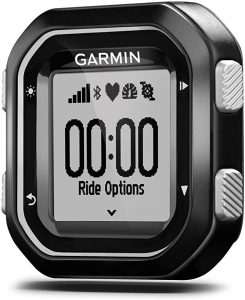 Like you, I spent many hours poring over bike computer specs and basically going a bit crazy with the amount of information and choice! Hopefully I can help save you some time and effort by just going over the bike computers that I actually decided to buy and use over the years. They are all great in their different ways and I wouldn’t have any hesitation in recommending any of them.

The Cateye Velo was the first bike computer I ever bought. In many ways, I think it was the best “bang for the buck” bike computer I had. It was pretty cheap but in terms of going from no bike computer at all to having info on speed, distance covered, averages etc it gave me a great amount of pleasure for very little outlay. 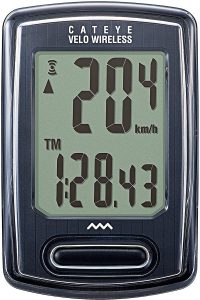 As you can see from the picture it’s a basic plastic body (mine was white) and the readout is a bit last millennium but it’s clear and very easy to read on the bike. The computer connects to a sensor on the front wheel via a cable which is slightly annoying but you really can’t complain for the price. I don’t think I ever replaced the battery and the computer seemed pretty indestructible.

If you want a basic, reliable and cost-effective solution then go for this – it’s a great little bike computer.

I would probably have kept the Cateye Velo longer if it hadn’t been stolen along with my bike.

So, after my bike theft, I decided to upgrade a little. I wanted to have a heart rate monitor so I went for the Cateye Strada. This is a definite upgrade and features wireless connections for heart rate and cadence all in a cool little push button package. The instructions are frankly incomprehensible but I really love this little computer. 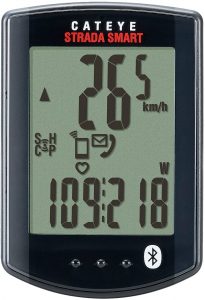 I’ve written a really detailed review of the Cateye Strada. Read it if you can really be bothered but if you want an awesome little computer that’s simple to use and has all the basics plus heart rate and cadence monitoring then look no further.

When I started seriously training for my first 100-mile ride…OK, let’s just stop there….I don’t want you to get the wrong idea here about the phrase “seriously training”. I made a lot of mistakes and learned a great deal from the experience but “serious training” it was not. It was more a trial and error exercise in learning to ride further and eat as much as I could stomach whilst on the move….

As I did on my long training rides actually. In fact, I frequently got lost and it soon became apparent that I needed some sort of “on handlebars” navigation. Checking Google maps on my phone every 10 minutes on long training rides just wasn’t practical.

Love this computer!! Why?

Well, lot’s of things but I love the fact that it is USB rechargeable and the battery lasts for hours (long enough for me to ride 100 miles, so a very long time!). The mapping and navigation is awesomely clear and easy to use, it’s easy to use even with gloves on, it tracks where I am so my family know where I am, it connects to my phone and shows texts and notifications……..did I say how awesome the phone connection is?

This is what really attracted me to this bike computer. You just download the Wahoo app onto your phone and basically control everything from there. It really is simple, simple, and intuitive to use.

So, if you want good navigation and an intuitive connection to your phone, great battery life, USB charging and the option to have cadence and heart rate monitoring then this could bike the computer for you. 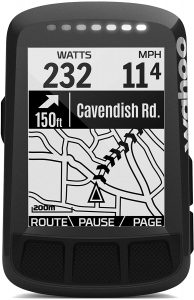 It comes in two flavors here in the UK – the Elemnt Bolt which is a slightly smaller version (which I have) and the Elemnt which basically does the same but has a bigger display. I have a feeling the Bolt version may not be available in the USA.

Finally, on to the Garmin edge Touring. I currently own, for various complicated reasons both the Elemnt Bolt above and a Garmin Edge Touring. I have a slightly older model. I have provided which is to the updated Explorer version. 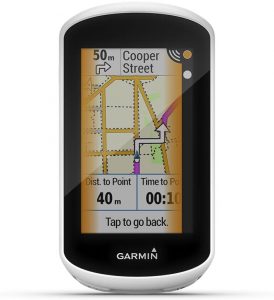 So, why do I own this as well as the Bolt? Well, essentially I was seduced by the lure of a color screen. Also by the look of the thing and, dear god, it’s one hell of a sexy bike computer! It’s a bit bigger than the Wahoo Elemnt and is just smoother looking and more beautiful to the touch.

The color screen is gorgeous and you can basically use it like a car sat nav and set it “in computer” to go anywhere. On the Wahoo Element you need to do this via the app which and it’s a bit more cumbersome. Also, once you get lost with the Element then it won’t guide you back on track as the Garmin Touring will. 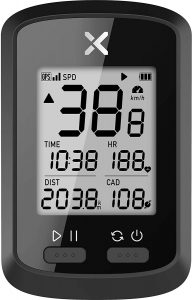 Professional XOSS Cycling Computer Riding APP supports uploading your riding data via Bluetooth and synchronizes with Strava at the same time which makes sharing your riding record & experience easy. Backlight, keystroke sound, auto-pause, unit (metric or imperial), the time zone can be set via the XOSS APP. The last two data can also be set in the bike computer. 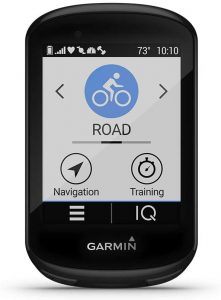 MTB dynamics track jump count, jump distance, hang time, and Grit, a measure of the ride’s difficulty, and Flow, which tracks the smoothness of your descent so you have a score to beat next time. Includes routable Garmin Cycle Map with popularity routing – helps you ride like a local – plus on-device route creation and off-course recalculation; mountain biking model has integrated Trail forks at. If you want the ultimate luxury in mapping and navigation then the Garmin may well be the machine for you. Personally, on the bike, I don’t find it quite as easy to read and to operate as the Wahoo Elemnt but then I do have giant, clumsy hands and middle-aged eyesight issues!

Having said that, you can’t connect a heart rate monitor to the Garmin or a cadence monitor but it’s not really meant for training – it’s meant for, well touring and exploring!

At some point, I will probably sell either the Garmin or the Element – a difficult choice. For me personally, I think the Element is a bit more practical and versatile but I’m a sucker for sexy round curves and a bit of glamorous color!